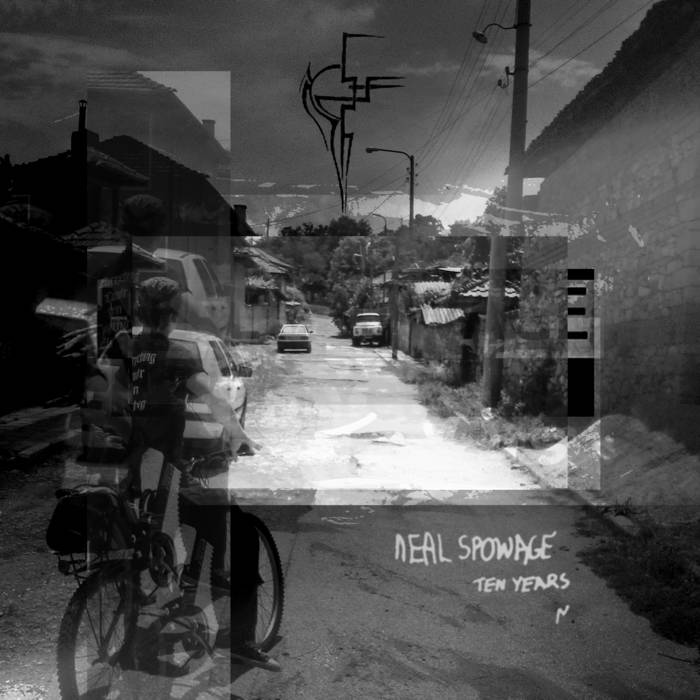 Neal Spowage is British born artist who designs, builds and composes with Sculptural Electronic Musical Instruments made from discarded objects that are brought together into assemblages or combines. They range from movement sensitive ornaments to invasive wearable devices.
He realises creative performance works for them using the disciplines of Dance, Video Art, Live Performance and Live Art and often collaborates on projects that vary from instrument commissions to duets and ensemble works.
His work is influenced by Dada, Constructivism, Absurdism and Fluxus. He is very much looking for the human in technology through his practice.
His interests include the investigation and understanding of collaborative relationships, democratic roles, kinetics, interaction, objects as totems, live performance, negotiating expertise between disciplines, gender dynamics in performance, video documentation as art.
Neal currently lives in Leicester, UK.


Ten Years.
This album contains studio recordings made between 2009 and 2019. Three of them are studio compositions in the traditional 20th century sense of the word (Composition Number six, Contact and Grate and The Dys-Appearing Body). The other four are either live or recorded in a single take so are more akin to studio sessions. They started out as adjuncts, or by products of my instrument building activities but have become playful articulations of my state of mind at various points in my life. I hope you enjoy them.

1. Composition Number Six (2009)
Recorded around 2009, this contains samples from two of my junk sculpture instruments. The Ghetto Bastard and the Electromagnetic Wand.

2. You Play Together But Act Apart (2010)
This was originally written for the Dirty Electronics Ensemble Christmas Concert in 2009 performed by myself, Visa Kouppala, Annelie Nederberg and Adam Chetty at De Montfort University. This piece mirrors the world of communication though language and technology old and new. Inspired by the incessant chatter, noise and interference, and the geographical move of western populations to the big city, it deals with the loss of old communities and the rise of new networks. We record, we repeat, we share yet we somehow face the other way. It is like dipping your head in to a communication hub through a time machine.
The performers, recorded here in 2010, are John Richards, Neal Spowage, Chloe Cutler and Andrew Hill (this includes recorded segments, or 'ghosts', of Annelie Nederberg, Visa Kouppala and Adam Chetty left over on the tapes from the Christmas concert).
It is played using four mobile phones and four double track cassette tape language machines, with their headphone speaker mute disabled so that feedback is generated between the headphone microphone and the internal speaker on the machine.

3. Convolve (2018)
Convolve was recorded in 2018 in one take using Ableton Live and one if it's long three pole delays that are packaged with the standard software. The sound source is a home-made LM555 oscillator circuit that was 'Hacked by design'. The only compositional changes in the piece are the delay times of the three-pole delay. The delay times change gradually over the duration of the piece. This was used on a Video work of the same name, 'Convolve'. Drone, repetition and hypnotic states of emotional participation.

4. Ode to the Hedonistic and Utilitarian Carnival Children of the Constructivist Revolution (2012)
This is a live binaural recording for five of my plungerphone instruments with no editing or processing. Each instrument is a unique analogue touch and tilt operated synth built into a plunger. For best effect, use headphones.
This is an experiment in incorporating Duchamp-esque sculpture, Affordances, Agency and Gesture into Live Electronic Music Performance. The recording was taken at Phoenix Square, Leicester, UK on 10th November 2012. The five performers are members of the Dirty Electronics Ensemble. Wei Wei Jin, Rick Nance, Stu Smith, Nasia Therapontos, Jim Frize.

5. Dys-appearing body (2012)
This was recorded as a commission for a short fashion film by Ania Sadkowska. The film was the culmination of a project based on the ageing body.

6. Contact and Grate (2008)
Contact and Grate is a short piece born of thrift. Sounds were recorded using a home-made contact microphone and an Olympus Dictaphone then assembled using Garageband.

7. Feedback (2011)
This is created wholly with a Behringer dd400 delay pedal in one take. It was patched into itself to create a closed feedback loop.

Bandcamp Daily  your guide to the world of Bandcamp